Tom Simonite at Technology Review just published a great piece covering “The Decline of Wikipedia” where they cite my my work (published in American Behavioral Scientist, see also the free preprint) with Geiger, Morgan and Riedl exploring potential reasons for Wikipedia’s declining pool of editors (see figure above).  In that work, we manually categorized newcomers to Wikipedia by the quality of their edits and built a set of models to predict which high quality newcomers would continue editing and which ones would leave the project.  We showed that the reason for the decline is not due to the the quality of newcomers but rather the reception they receive; newcomers whose work is immediately rejected and who are sent warning messages about their behavior don’t come back.  It looks like the dramatic change in 2007 corresponds to the introduction of counter-vandalism robots and automated tools in Wikipedia that were used to reject newcomers’ edits. 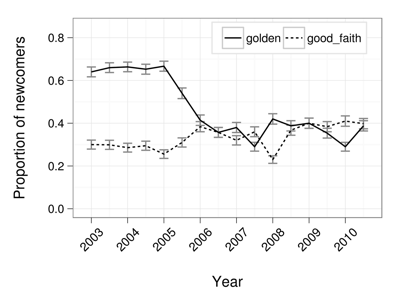 Newcomer quality. The proportion of newcomers who are trying to help Wikipedia (not vandals or spammers) 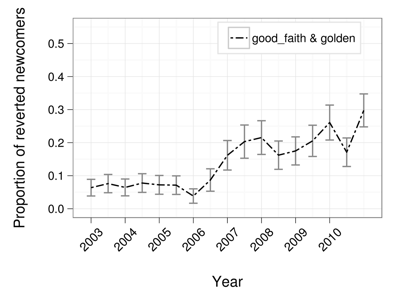 Newcomer rejection. The proportion of high quality newcomers whose first contributions are rejected.)

Newcomer survival. The proportion of high quality newcomers who keep editing for a couple of months.

The article at Technology Review incorporates many of the thoughts and ideas of others closely involved in Wikipedia’s future such as Sue Gardner, the director of the Wikimedia Foundation and Jimmy Wales, the site’s founder.  They discuss some of the new initiatives intended to help improve Wikipedia’s shortcomings including the VisualEditor, a WYSIWYG editor for Wikipedia released this summer, and WikiProject Editor Retention, a group of Wikipedia editors interested in exploring solutions generally.  However, they failed to reference a couple of initiatives that I think are equally important including the Editor Engagement team at the Wikimedia Foundation that’s using a data-driven approach to developing new features for Wikipedia readers and editors and Snuggle, an intelligent newcomer socialization system that I built and deployed to help Wikipedian mentors find high quality newcomers to lend support before they are scared away.

Written by aaron
Comments are closed.